On this page you find the complete manual for Easy Poll. If you are new to Easy Poll we suggest starting with Running a poll step-by-step.

In this chapter we explain how to run a poll in an easy to step-by-step approach and with screen-shots.

To create poll just enter /easypoll "Question" "Choice 1" "Choice 2" "Choice 3" into the channel you want to conduct the poll in.

"Choice 1" "Choice 2" "Choice 3" Is the list of the choices the users later can poll on. In our example it would be the title of movies, e.g. "The Dark Knight" "Pulp Fiction" etc.

If you just want to make a test poll to see how this app works feel free to use our demo with the command /easypoll demo. It will create the movie poll that you also see in our example screen-shots.

Please be aware of some limitations when creating a new poll:

Easy Poll will work great any private channel. But it will not work in read-only channels or any other channel type other than public and private channels.

Note that in order function in private channels Easy Poll will automatically ask you to invite its bot user to the channel. Please make sure the bot user remains in that channel for the duration of the poll.

In case Easy Poll has lost access to the private channel when trying to complete a poll it will automatically notify its owner ask for resolution.

After you entered the command Easy Poll will show you the poll you created to confirm: 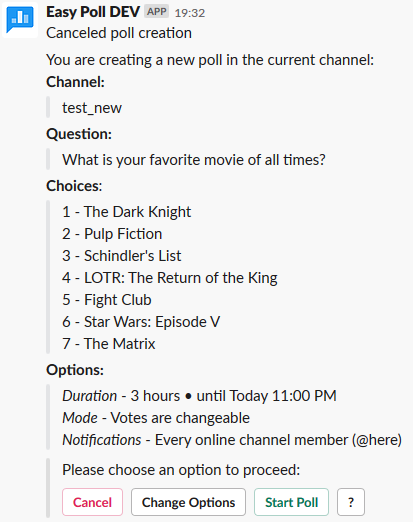 You can now verify that this is how you want your poll to look like and change options if needed.

In case one of your choice labels are too long a warning will be displayed and the word TRUNCATED next to the choice. You can continue with the truncated version or click on cancel to update your poll.

To proceed chose from one of the options:

To update your poll questions and choices you will need to re-submit the command to start a poll. Instead of re-typing everything just type / and Slack will show you the last used command. Click on it and you can now edit the whole thing in the command line.

You can change all options for your current poll in this dialog. 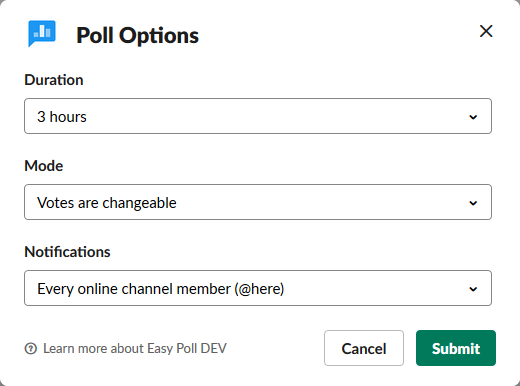 After you clicked on Start Poll a poll message specific to your poll will be posted in the current channel asking all users of the channel to vote. 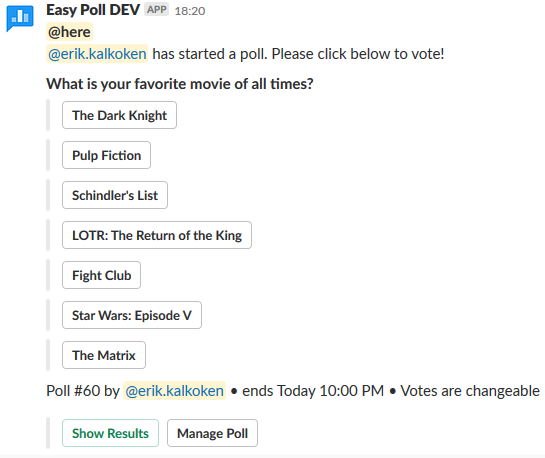 While the poll is running every user in the current channel can now vote on your poll.

In addition all users can always check the current standings of a poll by clicking on Show Results, which will look something like this:. 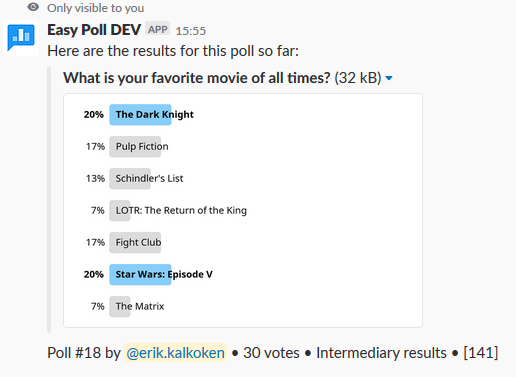 Should the need arise owners have the ability to manage the poll while it is running. After clicking on the Manage Poll button they have the following options:

A running poll is always centered on its poll message in the channel. In case that message accidentally got deleted users will no longer be able to place any votes. To address that special case its possible to create a new poll message with a special slash command.

Here is how to fix a running poll (this can only be done by the poll owner):

Once a poll has reached the end of its set duration Easy Poll will automatically replace the poll message with a new message showing the final results of the poll to all participants of the channel.

Here is an example on how the result message looks like: 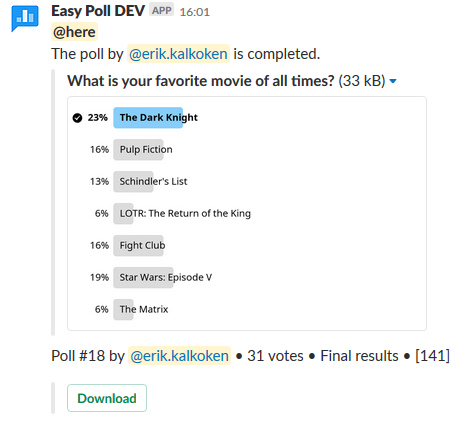 In addition it is possible to download the poll result as file by clicking on Download. This might be helpful for some who want to archive or show the results on a different platform. It also makes it easier to share the results in a different channel on Slack.

Here is an example on how the downloaded file looks like: 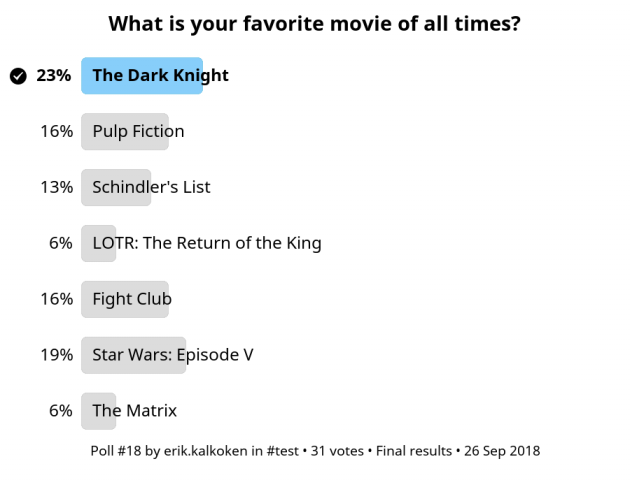 The poll results are provided as downloadable image file in PNG format with a resolution of approx. 900 x 690 pixels.

You can create your poll question and choices using non-Latin scripts like Japanese or Hebrew.

Here is an example poll chart with all currently supported languages: 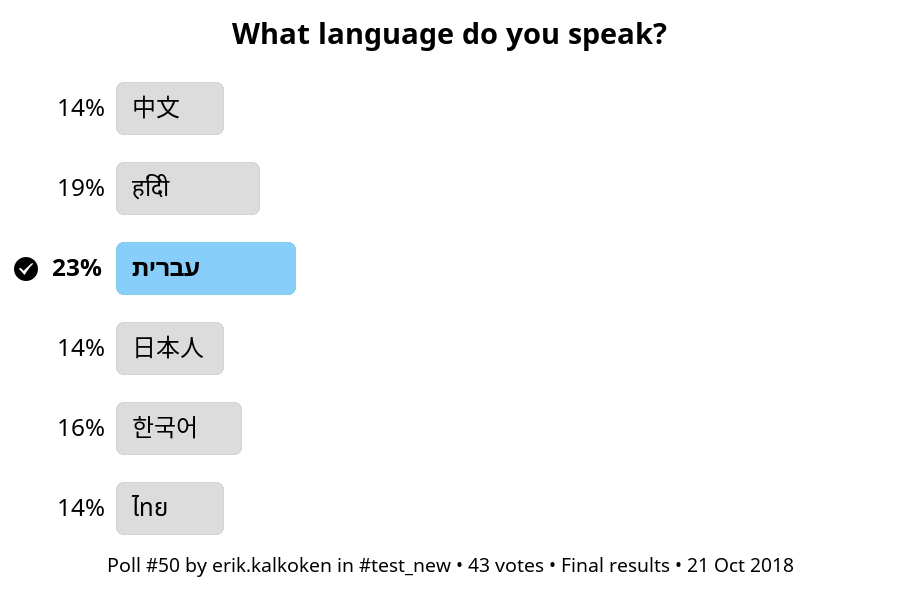 Note that this limitation does not apply for Chinese, Japanese and Korean. Those scripts can always be used together and also be mixed with Latin letters.

The feature to support non-latin scripts in polls is currently in BETA. If you see a bug or have any feedback please contact us so we can further improve this feature.